Do you have a soft spot (or perhaps a denser, chewy spot) in your heart for corner brownies? Do you appreciate the extra bake that offers up a wonderful texture quite separate from the plebeian brownies in the middle of the pan?

It’s 2017 and it’s time we gave into our desires.  This Baker’s Edge Nonstick Edge Brownie Pan is exactly what the doctor ordered. Built to retain the same batter as a traditional pan, there is no concern on changing up the recipe! Works with any standard brownie mix box.

This snake of a pan ensures that every edge gets that browning touch, offering you seemingly countless edge browned brownies.

“My family was struggling; we argued constantly over who would get the corner brownies and the edge brownies. I work hard during the week and I wanted those extra browned corners… but I put my family first. With the Baker’s Edge Brownie Pan, I don’t have to anymore! I am single, alone, and making brownies for myself every day of the week” – Tim 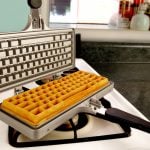 Get ready for the post-corona world with this massive scratch-off poster with 100 things to do after quarantine. From road trips to concerts…

Finally be able to charge all your gadgets straight from the wall! A USB Wall Outlet with actual plugs too is perfect for…

With holiday festivities around the corner, ’tis the season to ensure you and your loved ones get enough zzz’s. Innovative Swannies blue light…

Introduce your cat to one of the most popular music genres of the decade: EDM. What better way to get your cat integrated…

This thing puts the snuggie to shame. Strap up and drop down regardless of where you’re standing. Have comfort in every situation and…

Tired of not being able to use your AirPods or bluetooth headsets with the built in airplane entertainment system? Well AirFly is here…

If you have a modern desert vibe in your house you’ll love this concrete cactus lamp. Anyone can appreciate the cactus outline on…

Any old school geek will remember dial-up modem sounds and floppy disks. Now you can remember popping in the Wolfenstein 3d floppy with…

Star Wars fans will love dropping one of these nerdy ice cubes in their drink. This set of 8 Star Wars ice molds…

No fake news here! This toilet brush and holder set is a great talking point and a hilarious gift idea.

Affiliate Disclosure: We may receive compensation when you purchase products from links on our site.