Find the perfect gift for the nerd in your life. From unique gadgets to the best Star Wars gifts we have handpicked the best gifts for geeks. No matter what kind of geek you have in your life we have the best selection of geek gifts. Whether they are a gamer, 90s kid at heart, or even a computer lover there is sure to be a gift for them here. 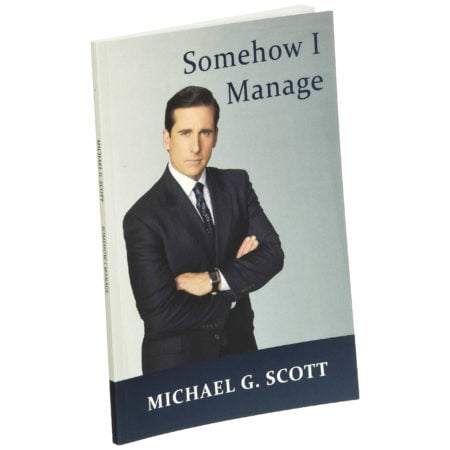 Wht fan of The Office wouldn’t want a copy of Somehow I Manage by Michael G. Scott on their bookshelf. Keep in mind the inside of this ‘book’ is a notebook to…

Have you ever wondered what it would be like to sip a Cardassian Kanar at Quark’s bar? Well now you can find out! And what’s better, you don’t even have to worry…

Any science lover will love looking at all of the elements of the periodic table of elements. This unique display includes 83 individual elements samples viewable through a clear acrylic block.

The Quest Pro brings a high end VR experience to the masses. With incredible optics, full-color mixed reality, and a new slim design the Meta Quest Pro is sure to level up…

Made from a real vinyl record this Star Wars themed clock is battery-powered and features light saber hands.

Enter the Matric every day with this uniquely futuristic lamp. This geeky accessory will make a great addition to any bedroom or gamer cave.

Train your very own R2-D2 to master various skills with this Star Wars Tamagotchi toy. You’ll be able to train R2-D2 through 19 skills and unlock 7 mini games.

Any geek will instantly recognize the orange and blue portals from the game Portal by Valve. Whether it’s for a book collection or a physical game collection these bookends are the perfect…

I suggest a new strategy, R2…always use the Wookiee cup! A great gift for the Star Wars fans, this BPA-free ceramic mug features Chewbacca’s likeness just the way we’ve always imagined him:…

The perfect apparel for hazardous environments, this pullover hoodie printed is printed with the design of Doctor Gordon Freeman’s iconic HEV suit! It’s perfect for Half-Life fans who want be properly dressed…

For the formal gamer, this stylish silk Mario tie features crisp, clean pixel art based on the sprite from Super Mario World. It’s a great way to 1up your business attire! Comes…

The Force is strong with these cards! This high-quality deck of playing cards features gorgeous artwork that perfectly renders your favorite Star Wars characters with the thick lines and bold colors of…

If you know a retro gamer that loves SNES or N64 this collection of gamer hats will give a nod to gaming’s past. Any gamer should recognize the button layout of these…

Whether you’re trying to fix a MacBook or a smartphone you’ve probably realized you need specialized tools to repair electronics. iFixit has been repairing devices for years and have built the this…

Bring the power and might of a fire breathing dragon to your bedside with this epic dragon table lamp. This incredible lamp has the appearance of a dragon blowing a fiery red…

Is there a more comfortable way to sleep at night than under the sinister red glow of a deadly weapon? No, obviously! And not only does it look awesome, but it’s a…

What Makes Someone a Geek?

Each person has their own definition of the word “geek”. If we were to define it in a general way, we’d say a geek is someone who has an above-average interest in something that’s outside of mainstream culture or is a specific subculture.

For example you can like Spiderman, like thousands of kids do around the world. And there are adults who like the web-slinging superhero as well. But just liking Spiderman doesn’t make you a geek. Knowing all the comics, having merch that exceeds the one or two things someone else might have and spending time collecting more merch and knowledge would.

Some other people would define a geek just by the amount of energy they expend on a certain topic. For example you could say we’re geek-geeks. We love geeks (and we self-identify as them) but more than that, we’ve created an entire business around them.

Finally, let’s look at the verb version, which is to “geek out”. Most people use that to mean they get excited over something other people don’t find riveting, such as … the specific models of ships in Star Wars.

Or French history, or tech – it doesn’t have to be in the science subculture to be geeky!

Again, we come back to the idea that being a nerd or a geek means something different to each person. If you want to get them something along those lines – shop at a geek-friendly retailer. You want to find things that are useful in daily life, but that play to their specific obsession.

Let’s say your friend is a gardening-geek. They probably don’t need another shirt with plants on it, but you can’t find a plant they don’t already own. Get them something that will help them foster their plants – like a Verdmo Wireless Soil Moisture Sensor.

It’s still plant themed, and it won’t sit collecting dust on a shelf.

You want to make sure your geek gift is three things:

Two of a good thing is sometimes just that – a good thing! We hope this guide to nerd gifts was helpful! If you have any suggestions please submit a product here.

About Awesome Stuff To Buy